What exactly is ‘hard’ and ‘soft’ water?

The concepts ‘hard water’ and ‘soft water’ are often brought up in conversation. It’s easy to identify scale in a coffee maker or notice when shower water feels slimy. But why does water quality change in this way, and what does it mean when it comes to drinking and household uses?

Here’s the lowdown on hard and soft water—and how you can control water hardness in your home.

What is hard water?

Hard water is water from a natural source with a high mineral content—specifically the minerals calcium and magnesium, as well as manganese, zinc, and other minor elements.

The ‘hardness’ itself is determined more by the taste, feel, and appearance of water, rather than it’s mineral content, which is why not all mineral water is considered hard. However, there is a scientific definition of water hardness based on concentrations of calcium carbonate, which the U.S. Geological Survey lists as follows:

Where is hard water found?

Calcium and magnesium dissolve into groundwater that’s moving through soil and rock with large deposits of these minerals. This is especially the case when a well is surrounded by calcium-rich soil.

When the USGS conducted a National Water-Quality Assessment on groundwater from 2,100 domestic wells across the country, they produced a color-coded map (below) detailing hard and soft water regions, which suggests that those on the East Coast and in the Midwest most often experience water hardness. 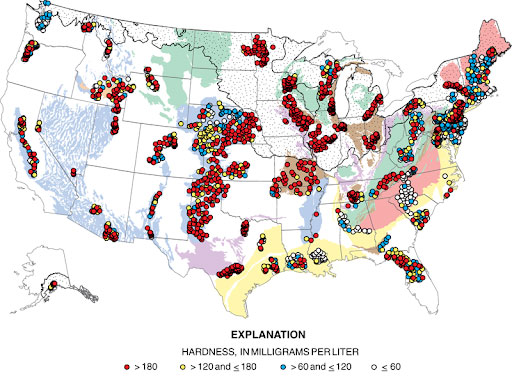 What is hard water good for?

According to a review in the International Journal of Preventative Medicine, some large studies have shown an inverse relationship between the hardness of drinking-water and cardiovascular disease.

Whether or not this association stands up to scrutiny, having high levels of essential minerals in your tap water is good news for your daily recommended intake. Hard water won’t completely fulfill your body’s need for calcium and magnesium, but it definitely contributes.

Why should I consider softening my household water?

There’s no health benefit to softening household water—at least for you and your family. Your household hardware, on the other hand, can receive a boost in lifespan when running on soft versus hard water.

The same water spots or residue that hard water leaves on dishes and shower fittings also collects inside devices such as washing machines, dishwashers, and coffee makers. This is especially true for any device that heats water, which increases the rate of calcium deposit formation. When deposits build, they damage the performance of an appliance. This includes your pipes, where buildups can reduce efficiency and thereby increase energy bills.

Other reasons for softening water are mostly aesthetic. Water hardness can be noticeable when showering or washing your hands as a kind of sliminess. after washing with soap and water, or when your drinking glasses at home become less than crystal clear. Softening your supply can therefore increase your daily enjoyment of water in these senses.

By using a water softener. These water filters are designed specifically to reduce calcium and magnesium in water, through a process of replacing the minerals with sodium chloride.

According to Scientific American, most water softeners contain a plastic resin structure that’s washed nightly with salt water, to cover it with sodium molecules. As your home water source runs through the filter, positive ions calcium and magnesium ions stick to the resin, releasing sodium ions and softening water.

What is soft water?

Soft water doesn’t necessarily have a lower mineral content than hard water, but it does have significantly less calcium and magnesium dissolved in it. Soft water is in this sense ‘purer’ and can have a filmy or slippery feel. 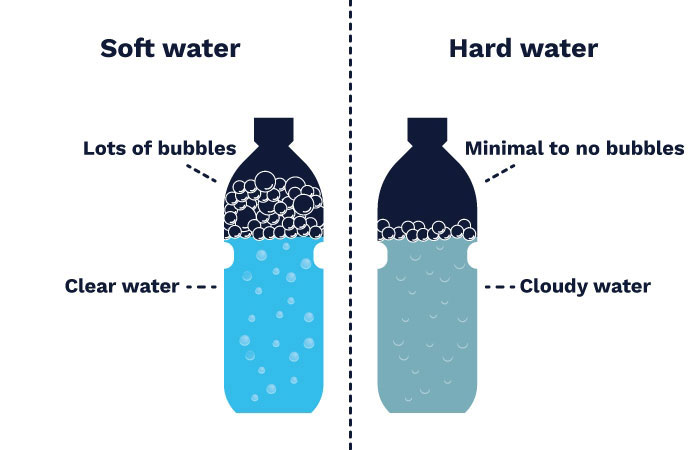 Where is soft water found?

Rainwater is inherently soft. As it hits the ground and begins feeding into environmental water systems, it begins to take on minerals and contaminants at different rates, depending on their prevalence in the local region.

As the map above indicates, soft water is found more on the West than East Coast, though it’s also common in New England and other areas with a lot of granite bedrock, which isn’t very porous.

If you’re not sure whether you have hard or soft water, TheSpruce recommends a simple home test: “shake up a small amount of dish soap with your tap water in a closed container. If the solution fails to create lots of suds, you probably have hard water.”

What is soft water good for?

Most people find soft water preferable for bathing, especially in terms of its effect on hair and skin. Showering with soft water is likely to leave your hair and skin feeling, well, softer!

Soft water is also generally preferable for cleaning, since it creates more suds and is less likely to produce mineral stains or deposits.

Sort of! Brita and other common household filter brands mostly use carbon filtration cartridges, which attract and bind organic contaminants such as calcium and magnesium in water. So they will remove enough of the hard minerals from tap water to make a noticeable difference to taste.

However, such devices simply don’t have the capacity or density to soften water on the level of a specifically designed softener—meaning that calcium and magnesium are likely to remain in water after filtering.