All ANSI / NSF certified water filters, regardless of filtration method, should make tap water purer and more pleasing on the nose and taste buds.

Glad to meet a fellow water filtration enthusiast! Let’s look at some of the reasons that tap water often tastes less than great, and how different types of filters remove those additives and contaminants.

Most people are familiar with the taste and smell of chlorine thanks to public swimming pools, and many of us notice that same bleach-like flavor in our untreated tap water. Chlorine is added to over 60 percent of all community water systems in the United States, according to the CDC. Smaller water treatment plants are particularly likely to use chlorine because it’s more cost-efficient than alternative options such as ozonation.

In small amounts, such as is found in most samples of treated water, chlorine is not deemed to be toxic. So while it might be off putting in terms of taste, the chemical is safe to drink at normal levels.

If your water smells like gas—that is, it tastes or smells like rotten eggs—you might be dealing with excess levels of hydrogen and sulfur (in the form of hydrogen sulfide). This compound is found in many water sources as a by-product of naturally decaying organic material. While this sounds a little nasty, the compound is not considered dangerous. However, hydrogen sulfide is thought to increase the rate of corrosion in plumbing.

Contrary to some sources, fluoride at the standard level is not detectable in water by taste. Fluoride was first added to the mains water supply as a public health initiative to reduce tooth decay on a country-wide scale, and today, the National Institute of Dental and Craniofacial Research estimates that 200 million Americans currently have access to fluoride-enhanced tap water. Back in 1952, a taste-test study using dental students as participants found that fluoride becomes tasteable (as a slight saltiness) at over double the then-standard amount used in water fluoridation.

People can taste copper in tap water when it reaches levels of around 1.3 milligrams per liter. Like most metals, it gives water a bitter edge. The same goes for iron, magnesium, and zinc. If you do have zinc in your tap water, it’s normally because of corroded plumbing, whereas magnesium and iron are naturally occurring in spring water—and beneficial to health at the right amounts.

Alternatively, metal sulfates such as Glauber’s and Epsom salts can give a medicinal-like aftertaste.

Small pieces of dissolved organic matter—particularly algal blooms at a water source—can make its way into your tap water and give off an earthy, musty, or even fishy taste. Because these contaminants are organic, bad tastes from natural solubles may be more detectable during spring, when most algal blooms occur.

Organic solubles don’t just originate at the water source, too. In old or poorly installed home water systems, including the tap itself, bacteria can enter and grow. Although usually harmless, their presence may cause the same earthy taste.

Read: The most common water contaminants that a water filter prevents.

What type of filter do you need? 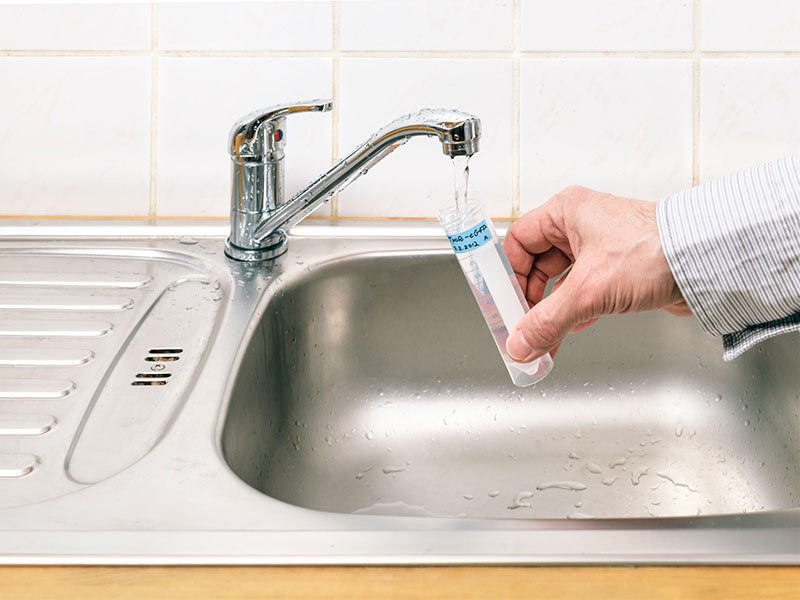 Most home water filters on the market today use replaceable carbon filtration cartridges or sticks, meaning that it’s easy enough to pick up a reliable filter, whatever your filtering needs, or your price range.

You can find carbon filters in pitcher-style filters (Brita filters), countertop filters that attach to (or on) your faucet, and under-sink models that feed into a secondary tap.

Carbon filters work because carbon has an ability to adsorb (note: not absorb.) Adsorption is the term for when molecules from a liquid bind with a solid surface. To achieve this binding, the carbon in a filter is ‘activated’ with oxygen, creating pockets or pores on the carbon’s surface, maximizing the material’s surface area.

A large surface area allows carbon filters to efficiently trap common causes of bad tastes and smells such as chlorine and carbon-based impurities (basically any organic chemical). According to the Wikipedia entry on carbon filtration, one gram of activated carbon has an almost unbelievable surface area of in excess of 3,000 square meters.

Unlike absorption, an adsorbent material remains on the surface of activated carbon, which is why carbon filters will lose efficiency over time, and eventually need to be replaced. This can be any time from a few months to a year. Check your filter instructions for the most accurate lifespan estimation.

If you’re interested in going beyond filtration for common bad tastes and smells, a reverse osmosis filter is often the go-to for providing the next level of filtration. While high-end carbon filters can be treated to capture a broad range of pollutants, most will only filter out materials that attract and adhere to carbon. This doesn’t include sodium, nitrates, and other chemicals.

Reverse osmosis filters function via a sieve-like mechanism, passing tap water through a series of super-fine, semi-permeable membranes. ‘Reverse osmosis’ refers to the pressure applied to tap water to move it from a more impure to less impure state—the opposite of natural osmotic pressure.

Technically a purifier rather than a filter, a UV system operates beyond the level of nasty tastes and smells, removing biological contaminants such as bacteria and cysts (think Giardia) through light wavelengths that destroy structures at a cellular level.

In fact, because nothing is actually being filtered with UV disinfection, this method does not remove some taste-causing dissolved organics, inorganics, or particles in the water. So, if you’re planning to drop a serious amount of cash on a filter, you could combine all three! A UV purifier will help ensure your water is bacteria-free, a reverse osmosis filter removes non-carbon-based pollutants, while a regular carbon filter will take care of those annoying and off putting tastes.