How to Get Rid of Sulfur and Other Well Water Smells

Of all the threats to well water quality, sulfur contamination is one of the most common and unpleasant.

While the levels of sulfur found in most wells aren’t considered dangerous, it can be disappointing to reach for a refreshing drink, only to receive a glass of something with an off-putting rotten egg odor and taste. 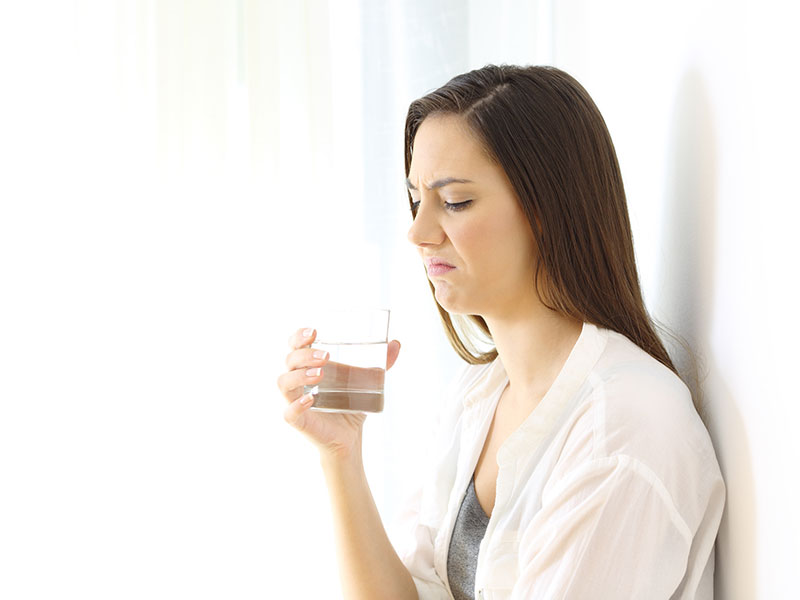 Thankfully, there are filtration solutions available that can effectively rid your well supply of sulfides.

(If you’re looking for a sulfur-ready well water system, head to our rankings of The Best Whole House Water Filters for Well Water.)

How to reduce sulfur and other smells in well water

When it comes to reducing sulfur levels in well water, there are several filter types to choose from.

Selecting the right filtration strategy depends upon knowing what other aesthetic contaminants may be lurking in your water supply. An aesthetic contaminant is a substance that primarily affects the taste, smell, or appearance of water, but is unlikely to present a health risk.

Three common and effective kinds of filter for sulfides and other aesthetic contaminants are:

To remove all nasty smells and tastes from well water, you may need to combine several filter stages. To see what kinds of filtration systems suit your well, check out the Best Whole House Water Filters for Well water >

Oxidizing filters introduce air pockets (containing oxygen) into the water supply, which alter the makeup of contaminants, making them more susceptible to capture by the media bed in the filter.

Also known as air injection or induction filters, these devices are designed to convert dissolved pollutants like hydrogen sulfide into insoluble matter, which is then trapped in the tank while the water moves through.

Oxidizing media filters are useful for:

Activated carbon is the most common type of filter media found in homes across the country – and one of the most powerful.

Despite consisting simply of finely ground, tightly packed, pure charcoal, activated carbon is able to remove a wide range of organic contaminants from water, through a principle called adsorption.

As contaminants pass through the filter, they adhere to the carbon’s large surface area, leaving the water supply.

Carbon filters are great for improving the smell and taste of water, because many aesthetic contaminants – sulfur included – are caused by organic matter. When plant material decays and enters the water supply, it creates musty, fishy, or rotten odors, especially toward the end of summer.

Carbon block filters are useful for:

Cholrine, peroxide, and other chemical disinfectants are normally associated with public water supplies, but they can be used in private wells too.

Disinfectants are often applied using a feed pump with a monitor to check on chemical levels. Water may also be fed via a tank, to increase the amount of time spent in contact with the disinfectant.

These devices are usually found in areas with higher than average sulfur contamination, and are particularly effective at eliminating unwanted pollutants.

While many well owners dislike the idea of introducing chemicals into their water supply, the good news is that adding a carbon filter after disinfection will remove any left over chemical traces, leaving your water pure and safe.

Disinfectants are useful for:

What about water softeners?

Some internet sources claim that water softeners can be used to remove sulfur from well water. This isn’t true – at least when it comes to traditional devices.

While many softeners and conditions are able to improve the aesthetic quality of water, they target minerals like calcium and magnesium, which cause scaling and can irritate skin in some circumstances.

Water softeners are useful for:

Why is my well water contaminated with sulfer?

If your well water has a sulfury aroma, you’re not alone. Many homeowners across the country struggle with sulfur contamination, mostly due to one of two reasons:

Both rainwater and groundwater can naturally contain sulfates, so depending on the geology of your local area, some contamination may be inevitable. Of all types of bedrock, sandstone and shale are often the most prone to releasing sulfur odors.

In ecosystems that contain lots of dead vegetation, hydrogen sulfide gas can be released as part of the decaying process. Sulfides from decaying plants can be a particular issue in agricultural areas, where fertilizers leach into the environment and disrupt growth cycles.

There are several types of soil-dwelling sulfur bacteria that feed on sulfates and release hydrogen sulfur gas as a waste product. When bacteria live in or near a well, this gas can become trapped in the water supply.

Aside from natural causes of sulfur, aging water heaters can also be a source of contamination.

If a water heater has sat dormant for a long period before reuse, it may accumulate bacteria and produce contaminated water.

When a water heater is used in conjunction with a water sofenter, the softening process can affect the magnesium rod inside the heating unit. Soft water can erode the magnesium and produce hydrogen sulfide.

How to identity sulfur in well water

However, visible signs of contamination aren’t always reliable. The most accurate method of identification is a well water test. There are both professional and at-home tests designed specifically to look for sulfur, with the DIY versions available online for $20-50.

Always test your well water regularly, on a schedule that’s appropriate for the features of your local environment.

Don’t judge sulfur contamination only by how water smells. Water supplies may be affected by sulfur bacteria without any detectable signs, so it’s important to always carry out a yearly well water test – use a home test kit or send off water samples to a state-approved lab.

Once sulfur has been detected in your well water system, it’s important to identify the primary cause of contamination. This will allow you to apply the correct solution.

To check whether your water heater is causing contamination, perform tests on samples of both hot and cold water from your faucet.

If the cold water test comes back negative, and the hot water test positive, you can assume that the issue is coming from the heater.

To fix this, you’ll need to replace the anode rod inside the heater with a non-magnesium alternative, such as an aluminum rod. This won’t create a reaction with your water supply.

If the heater shows no signs of contamination, then the cause is likely to stem from the groundwater itself. Look for recent changes to the local environment, and check the plumbing for any corrosion hot spots (professional expertise may be required).

The bottom line: how dangerous is it to drink sulfur in water?

People who are used to drinking sulfur-contaminated water are less likely to experience negative health effects, while those who never encounter sulfur may be sensitive to even small amounts.

Beyond the direct health risks, the presence of sulfur bacteria in water can affect the functioning of a well water system. As bacteria grow, they clog pipes and increase sulfur levels to the extent where corrosion and staining occur.

Overall, the most common result of sulfur contamination is not a health concern, but an aesthetic one. At moderate levels, sulfur makes water smell and taste offputting, and the aroma can cling to clothes and linens washed in sulfur-contaminated water.

About the Author: Joe Hitchcock

Joe is a freelance writer from Vancouver, Canada. He writes across various industries and media outlets, providing readers with the very best info on the web.