Skip to content
What is the Consumer Confidence Report by the Environmental Protection Agency?

The Consumer Confident Report and your drinking water

Who is the EPA?

In December 1970, Richard Nixon attempted to consolidate the growing environmental responsibilities of the federal government, by establishing the Environmental Protection Agency. The EPA is intended to create and enforce regulations that fulfil environmental legislation as it gets passed by the government.

HowStuffWorks explains the EPA like this: “While Congress sets environmental laws like the Clean Air Act, it’s up to the EPA to determine how the United States will reach the goals laid out by the legislation.”

Being responsible for safeguarding the country’s environmental laws obviously means the EPA spends a lot of time and resources on monitoring the health, safety, and public awareness of our drinking water. One aspect of their efforts is an annual drinking water quality report, which can be used to determine the overall quality of your local water source. This document is known as the Consumer Confidence Report or CCR.

What will a CCR tell you?

By an EPA ruling, every community water supplier needs to provide an annual report to its customers by July 1, each year. (Note: so that doesn’t include people who get their water from a private well).

A CCR should contain information on where your tap water comes from —reservoir, lake, river, or public well. Private well water is not included, so a well water test is needed to understand the water quality. It will also let you know the major risks in terms of contamination for your water sources, as well as the results of any lab tests on that source.

This includes the levels of contaminants such as lead and bacteria, as well as chemical traces from treatments like chlorine, and the (partly beneficial) sediments, minerals, and metals found in all sources of natural, non-distilled water. The results will tell you if you need additional treatment on your drinking water and/or what type of water purification system you need.

Here’s a sample CCR. Because reports are produced by individual suppliers, not all CCRs will look the same. A report should also tell you how your water quality compares to federal safety standards and levels beyond which action is required—the Action Level (see the third column from the left in the table above).

How to use the CCR to find your local water quality

You should receive your CCR in the mail or via email from your water supplier. If that doesn’t happen, you can request a CCR by phone, or use this tool from the EPA to find your local report. 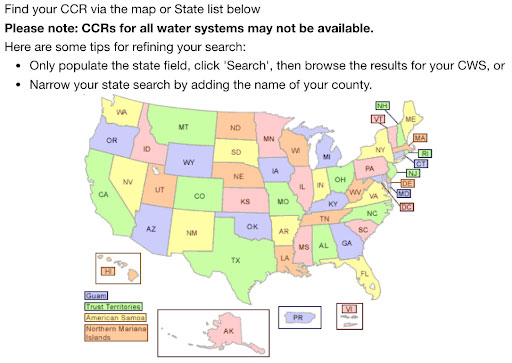 Using this resource to locate the San Francisco regional water system, for example, brings you to the 2019 Annual Water Quality Report for the region supplier. From there, it’s simple enough to download the report, which is formatted according to a series of EPA requirements, which ensure a certain level of readability and accuracy.

Many CCRs, including the 2019 City of San Francisco report above, present findings as both text and a table. The idea behind this is that some readers respond more readily to information when it’s presented in a narrativized form (such as a blog like this), while more visual or facts-and-figures types can easily see the information they need. In addition, the EPA asks that all suppliers make reports available in Spanish.

In fact, a paper in the journal RISK: Health, Safety, and Environment looked into consumer reactions to the CCR, back when suppliers were first mandated to send out reports in 1999. The study found that consumers are in general able to effectively read and extract useful insights from CCR reports of various formulations, so there’s no need to be put off by the sight of scary-looking acronyms or tables!

What does it take to comply with a CCR?

The EPA produces a quick reference guide to help local water suppliers formulate and pass the CCR requirements. The guide emphasizes the role the CCR as an educational, not a regulatory document:

“Implementation of the CCR Rule will result in increased awareness of consumers to potential health risks so they may make informed decisions to reduce those risks, including taking steps toward protecting their water supply.”

It’s worth bearing this in mind, as it shows that receiving a CCR in the mail doesn’t guarantee the safety of your tap water. Instead, reports are useful for their clarity and honesty when it comes to exactly what’s in your water. What the EPA hopes is that you take notice of those findings, and use them to inform your choice of home filtration, if any.